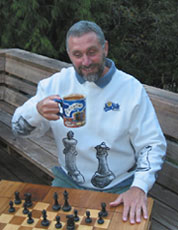 Early in his teaching career, John established and taught a chess program, called Analytical Thinking/Chess, as part of the regular school curriculum at Hillcrest School of Oregon. Chess classes consisted of two-period blocks. The first period of each block consisted of a lecture on the principles and practices of chess. During the lecture period, students practiced skills which are transferable to any public school setting, e.g. listening skills, note-taking skills, vocabulary skills, group discussion skills, reading comprehension skills, and oral language acquisition and usage skills. In addition, students gave class presentations by reviewing with the class their own chess games that they had recorded.

The second period of each block consisted of hands-on activities, drills, and ladder challenges, where students practiced the principles they had learned in a friendly, competitive atmosphere. A second component of the chess program involved student participation in United States Chess Federation (USCF) rated tournaments in the community, visits to city chess clubs, and chess matches with other middle schools and high schools.

Later in his career, John Bain transferred from Hillcrest School of Oregon to Central High School in Independence, Oregon where he is a special education and 9th grade English teacher. He started a chess club at the school, and has incorporated chess into the curriculum at Central High School.

John's published books include Chess Rules For Students, Checkmate! Ideas For Students and Chess Tactics For Students, which are being used enthusiastically throughout the United States in elementary and middle-school chess programs. The books are available from your favorite chess materials distributor or directly from the author, via the chessforstudents.com website.