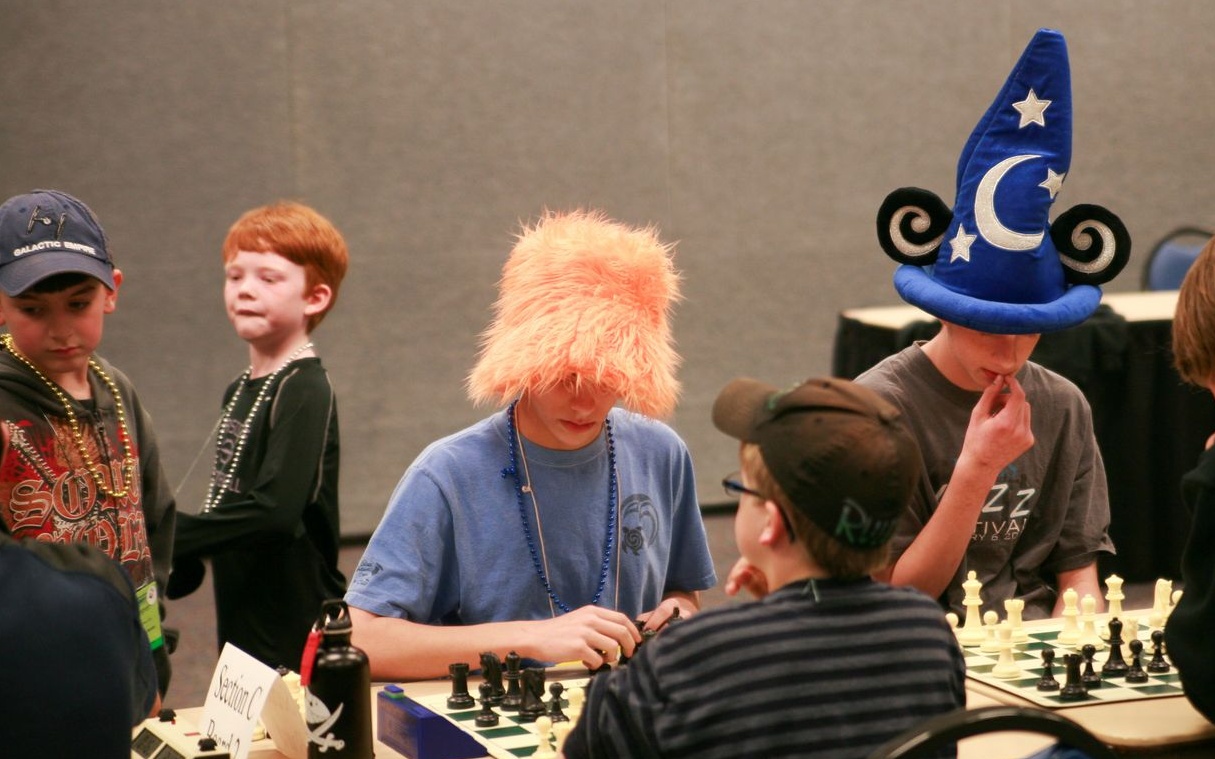 From time to time—about once every five or six weeks, run a Bughouse Chess Quad Tournament. Bughouse Chess consists of 2-player teams, and 4-teams are in a Quad--or 8 players altogether in one Quad.

Bughouse Chess is fun, festive and addictive! And, FUN! Students sometimes like to wear costumes for Bughouse Chess!

Bughouse Chess has advantages and disadvantages. Advantages include fun, excitement, team play, piece placement, attacking flight squares and checkmate patterns. The empty squares on the board are important in Bughouse Chess—they are the only squares where new pieces may be placed. Thinking more about where pieces can go is a skill that can be useful in normal chess.

Some expert chess players suggest that they pay more attention to empty squares than beginners do. In normal chess, a student may see a square where he or she would like to place a Knight, but it would take 3-4 moves to get the Knight there! Suddenly, the student is thinking 3-4 moves ahead in chess! Wow!

On the downside, Bughouse Chess encourages students to play too fast and to focus on superficial tactics and blitz attacks at the expense of patient, analytical, long-term, strategic planning.

Nevertheless, Bughouse Chess is a fun way to unwind after a period of studying or playing standard chess, but not a good way to prepare for a serious competition.

What is Bughouse Chess?

In Bughouse Chess, two chessboards are set up next to each other. Players work in teams of two--sitting on the same side--with the first teammate playing white on one board and the second playing black on the other board.

The rule that makes Bughouse Chess crazy is that when players capture a piece, they pass it to their partner on the other board. Each player accumulates those pieces, and on any turn can “drop” a piece from his or her “hand” onto any empty square on the board. The match ends whenever one player delivers checkmate, earning a win for the team.

A piece can be "dropped" to give check, or even checkmate--as long as it's placed on an empty square--so the end of the game can happen quickly for players who aren’t paying attention to their opponents’ off-board pieces.

Players must display pieces openly, can not hide them, but they can talk to their partner during games. A player who could deliver checkmate if only she had a Knight in her hand might shout, “Trade for a Knight! Get me a Knight now!” Or, she might whisper it!

In Bughouse Chess, time is of the essence: Each board has its own chess clock, which is placed on the outside facing inward so that all four players can see both clocks. Usually, each player gets just five minutes of playing time for the entire game. If a team's time expires on either clock, the match is over and the team loses by time forfeiture. Generally Bughouse Chess is played in Quad Tournaments, students play a 5/5 Match, where students play three games with 5-minutes on each player's clock. Good, simple, sturdy chess clocks ($24.95) and chess sets ($14.00) are essential to Bughouse Chess Quad Tournaments!

Bughouse Chess is a fun way to unwind after a period of studying or playing standard chess, but not a good way to prepare for a serious competition.

NEXT> Part 4-6: Scholastic Chess Tournaments and Ratings!  introduces students to more serious competition with chess players from other schools. Field trips to scholastic tournaments give students a sense of belonging--to be part of a "team!"